It all started 39 years ago, in 1980, when I met my wife Finnie at Stellenbosch university. I was a student in theology and she was studying medicine. 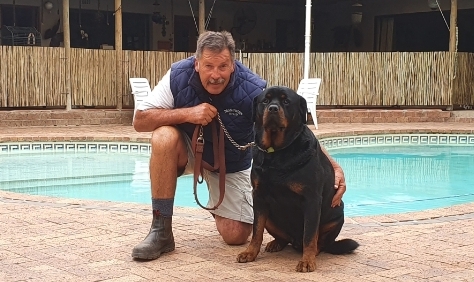 Finnie was a girl from the rural town of Swellendam with a huge passion and love for horses. On top of that she was an excellent equestrienne. The previous year she was the South African five-gaited National Champion at the annual Bloemfontein Show.

We got married in 1984. In 1988 I was ordained in the Dutch Reform Church in Maitland (suburb of Cape Town) and served there as a pastor for the next  10 years.  Six years after we got married we expected our first child. This was when the ball really started rolling for me and horses. When Finnie was three months pregnant introduced me to the horse that she was half leasing from a friend. This was a mare of 16.3 hands, an ex-racehorse named Sister Beware. We only found out later that she was from the family of a proper racehorse called Peter Beware.

The purpose of the introduction was very clear. It would be my responsibility to ride her horse during the time of her pregnancy – an extremely tough instruction at the time! At that stage of my life I knew nothing about horses, had never sat on any and was not inclined to do so either.

After much persuasion and a very important condition (she would instruct me until the day of the birth of our child) I obliged and just there and then, my career and love for horses started. My first ride was on a former racehorse, and I just didn’t realise that working with racehorses would later become my full-time occupation.

A year after that another four-legged wonder came into my life and triggered my interest in the behaviour of horses. His name was Zarp, and I found out that he was a very problematic character.

My adventures with Zarp started at our first endurance ride in Swellendam. I was battling to mount a very explosive character and was wondering what the day would hold for me. Zarp was like a racehorse, tuned and ready to jump out of the starting stalls. He was ready to run the race of his life!

At that point I was completely ignorant regarding horse behaviour and I thought, ‘Well, he is supposed to know that everything is and will be ok. It is only going to be a relaxed endurance ride. Why then his complete adverse and unwanted behaviour?’

At the age of 33, I was very fit and strong and managed to get on Zarp’s back after getting him to face a wall underneath a bridge outside of town. And off we went, not at a gallant canter but at a full gallop. We ended our first endurance ride (60 km) like we started, at a full gallop.

Obviously Zarp had physical aches (painful muscles, tied up) after the ride and I was told by the vet on course that he was to be rested for at least three weeks after which I had to slowly bring him back into work.

While being elated to be able to complete my first 60 km in endurance I was severely distressed about the behaviour of my horse. It was very clear to me that Zarp did not understand what was expected of him and that I probably only compounded the psychological scars he already had. He was in full gallop not because he wanted to but because he was running away from fear and anxiety. Later in my career I’d learn that running away is what horses do in their natural environment when they are afraid.

I had to find out the truth about horse behaviour. What are they in essence? How do they operate in their natural environment? But most importantly, how do they ‘think’ and can they think like humans do at all? Is it by any chance possible for them to reason and sort things out for themselves or would it be my responsibility, as the trainer, to think on their behalf?

These thoughts, the urge to help Zarp, quickly occupied and then overtook my life and mind. I had always loved animals and had a great empathy for them. My biggest wish was to help Zarp, to reschool him so that he could have a better perspective of life, to enjoy my company and to enjoy being ridden.

And so, my journey started with days and nights of reading, studying, watching videos and applying what I had learnt, on the following days. There was no internet and it was a slow process, but it suited me well. I had learnt a few important lessons of working with animals, one being that while one may understand the theory, it was a completely different concept to apply that knowledge in practice.

I had to deal with learning through experience. You only learn while you are working with the animal. And you are dealing with an animal that has no idea, does not understand anything and on top of this may have many issues because of its past experiences. This was a very long and slow process  but extremely valuable. I was learning through my mistakes which made the whole re-training process much more difficult. This however would become one of the most important learning curves of my journey with horses and how to train them. 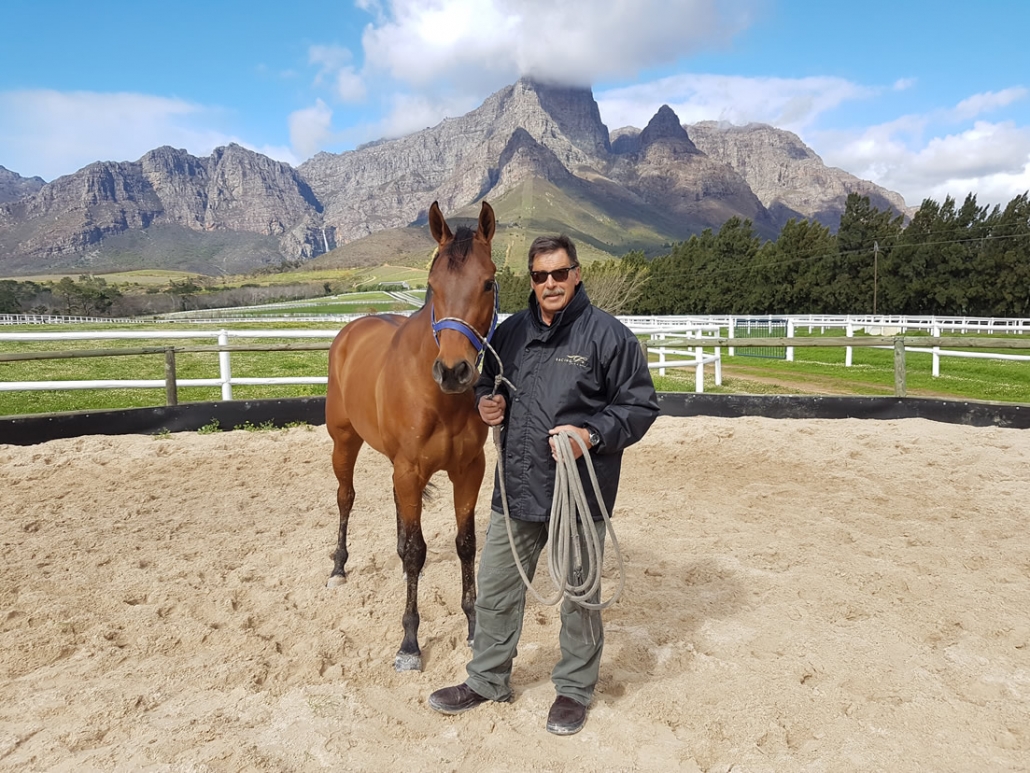 Firstly it is extremely important to understand the horse for what it is in its natural environment. The horse is what we call a fear and flight animal. Within their natural environment they are food for predators. They are the hunted. Millions of years of evolution has therefore produced an over sensitive and athletic animal with the most acute senses that has the ability to catapult itself very quickly away from any perceived danger.  They are  irrational animals that will first run and “think” later. Science teaches us that every animal has a motivator to stay alive. For predators that motivator is to eat and therefore they need to hunt. For horses that motivator is to be able to run away from the hunters. For a fear and flight animal it is therefore not necessary to have the ability to reason. Their brain for example lacks those parts like the prefrontal cortex and the right neocortex that give us as human beings the ability to be objective, reason, analyze and to think for ourselves. The horse does not “know” anything and will never “know” anything within a domesticated environment unless we train it into what is expected of them. Anthropomorphism (ascribing human attributes to animals) is a problem I encounter almost on a daily basis. People expect horses to “know” and if they do not respond the way expected, punishment is justified. It is thus of crucial importance that through training the flight response of the horse needs to be put under stimulus control so that flight (walk, trot and canter) is only expressed when we ask for it. The horse also need to be desensitized and habituated to get “used to” all the elements in our domesticated environment. In a way we as trainers have to “think” for horses while we gradually guide them along in the learning process so that they know what is expected of them.

We also know that they operate within a herd structure. Their safety also greatly depends on being assimilated into a herd while at the same time adhering to the dynamics of it. Within the herd bonding takes place between horses while we believe there is a hierarchy wherein some horse plays a leading role more than others.

There is an expression that says:”bend the tree while it is still young”. This normally applies to the upbringing, raising and education of children. This is also very true with the training of horses. The sooner we start the better the chances of a positive outcome. 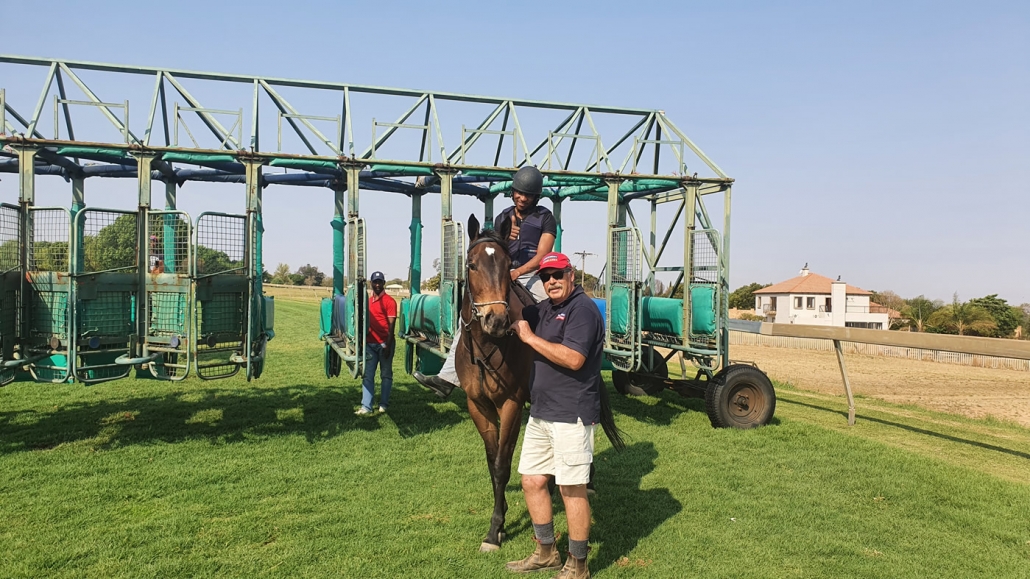 The second pillar on which my philosophy rests is the science of learning. Although the horse’s brain lacks the ability to reason it can learn like any other brain. The understanding of the practice and principles of operant and classical conditioning are therefore paramount. Operant conditioning can be described as learning through trial and error or pressure and release. With operant conditioning we are connecting behaviour to consequences. Classical conditioning can be described as learning through association. This happens when two different stimuli are linked together to produce a new learned response.

My first exposure to training animals (that was a few years before my involvement with horses) was with one of our Rottweilers called Duke. Obviously all animals learn in the same way through the principles of operant and classical conditioning. The big difference here (and advantage) is that one is working with a predator that is a hunter in their natural environment. To hunt means, for example, that a pack of dogs need to strategize to be able to track down their prey. That means that the brain of a dog has the ability to solve problems and one could say has certain attributes that makes training a bit easier.

Over the years I have been fortunate enough to work in different parts of the world. Each project was very tough and it really took every bit of experience and knowledge to be successful. A few years ago I got a call from Mike de Kock, Champion South African Race Horse trainer, while he was training his string of horses in Dubai to assist with a very difficult and fractured horse with the name of Fawree. Fawree had major issues in the starting Stalls. By the time Mike called me he had already fallen over backwards, almost severely injuring himself and the jockey when, during his last race, he bolted out onto the race course after he broke through the front gates, dislodging his rider in the stalls at the same time. He had major problems and we had to get him ready for the big event, World Cup Night. I only had seven days to fix his problems. I concentrated on getting his behaviour under control while at the same time desensitizing him for and habituating him to any adverse stimuli that might affect his behaviour on course and in the stalls. After seven days he behaved extremely well. His suspension was lifted by the local starter and he was ready to race on World Cup Night. Through the years I have learned that the proof really is in the pudding in the actual  situation. That means the final test would be the night of his race. Everybody in Dubai knew about Fawree, just before I left (I had to come back to South Africa 7 days before the big event) I was interviewed by the Dubai Racing TV Channel and the Gulf News (biggest News Paper in the UAE) had a middle page article on the day of the big race event on the work I did with him. Although Fawree behaved well enough to go into the race he did not run as expected and finished midfield. To me it was still a win because a previously fractured horse now behaved well enough to continue his racing career.

I am based in the Cape Town area (Joostenbergvlakte) but travel on a regular basis to other provinces for work. Anybody that wants to utilize my services can call or whatsapp me on 083 458 9830, e mail me on malandutoit3@gmail.com, visit my Facebook profile or visit my website at www.malandutoit.co.za. 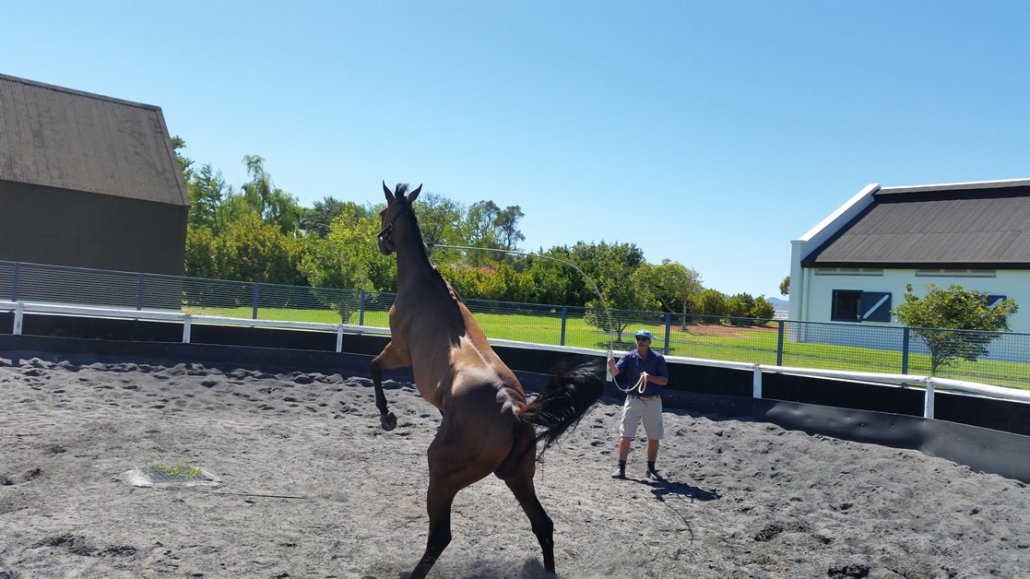 Want to join the discussion?
Feel free to contribute!

Scroll to top
Send via WhatsApp